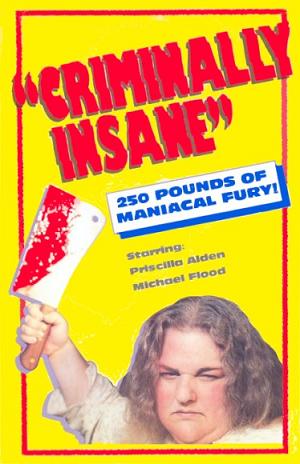 The quintessential Fat Bitch.
"My heart is just fine as long as my stomach is not empty."
— Ethel
Advertisement:

Institutionalized for an indeterminate amount of time due to suffering from a number of problems, the most prominent of which is her violent mood swings, the morbidly obese Ethel Janowski is eventually released into the care of her grandmother despite the protests of one Doctor Gerard, who suggests that Ethel come in four times a week for electroshock therapy. Once home, the surly Ethel starts stuffing her face, eating her poor grandmother out of house and home. Becoming fed up with Ethel's gorging, granny empties the refrigerator and locks all the food away in the cupboards, telling Ethel that it's high time she went on a diet whether she wants to or not. Not taking this well, Ethel proceeds to stab her grandmother to death and cuts the key to the pantry locks out her cold dead hand.

With no one around to stop her, Ethel goes on an eating binge and quickly runs out of food, necessitating that she order more from the local grocery store. When the teenaged delivery boy shows up with the food and demands payment for it and other overdue bills, a frustrated Ethel murders him, barely having time to lock the body in her grandmother's room with the old woman's rapidly decaying corpse before her prostitute sister Rosalie shows up needing a place to stay. Begrudgingly giving Rosalie and Rosalie's abusive pimp and boyfriend John room and board, Ethel spins a lie about how their grandmother has gone away to visit someone and beats Doctor Gerard to death when he stops by asking questions about where Granny Janowski is, and why Ethel has not gone to her scheduled treatments. With the bodies piling up (not to mention smelling terrible) and her housemates and the police becoming suspicious, Ethel starts to crack even more. What is a fat, unstable woman who just wants to eat in peace to do? Oh yeah, kill everyone!

A bit of a Cult Classic, Criminally Insane had a poorly received shot-on-video sequel thirteen years after its initial release, though much like Silent Night, Deadly Night Part 2 and the sequels to The Boogeyman, it consists primarily of footage recycled from its predecessor. What little new footage there is has Ethel being dumped in a lax halfway house due to extreme budget cuts to the asylum she was placed in, and it isn't long until her appetite and murderous urges get the best of her.

In 2005, both Criminally Insane films got a DVD release by Shock-O-Rama Cinema, coming packaged with the vampire flick Satan's Black Wedding. While the sequel is barebones, Criminally Insane was bestowed with a commentary track and an interview with the director, a producer, and its star, Priscilla Alden.

A remake of the first film, using the alternate title Crazy Fat Ethel, was released in 2016.

The first film provides examples of the following tropes:

Its sequel provides examples of the following tropes: