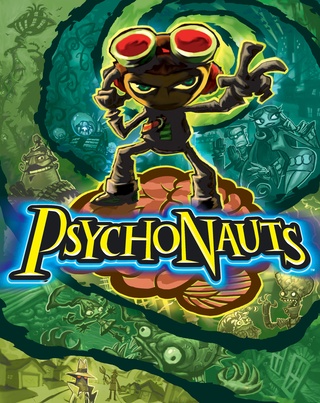 "You shall engage the enemy in his own mentality! You shall chase his dreams! You shall fight his demons! You shall live his nightmares. And those of you who fight well, you will find yourselves on the path to becoming international secret agents — in other words... Psychonauts! The rest of you... will die!"
— Coach Oleander, addressing a group of children around a campfire.
Advertisement:

Psychonauts is a 2005 Action-Adventure game, and the debut title for Double Fine Productions, headed by former LucasArts employee Tim Schafer. It's the story of a young psychic prodigy named Razputin Aquato ("Raz" for short) who runs away from his home in the circus (an inversion of the usual run away to the circus trope) to sneak into Whispering Rock, a government training camp for child psychics like himself.

Raz is quickly caught by the camp's leaders, but he's allowed to stay for a while until his psychic-hating dad will come to take him home again. During his one day of training, he discovers that something horrible is going on: someone is stealing the brains of his fellow campers, leaving them mindless zombies obsessed with teeeeeveeeee and hacky-sacking. As he tracks the brain-stealing scheme to the source, he hones his powers, and encounters a variety of eccentric and downright crazy characters. Raz finds himself forced to literally get into their heads and fight his way through their memories and mental disorders in order to save the world.

The platforming aspect of Psychonauts is often made of Bizarrchitecture, and some levels — especially the notorious final one — are Nintendo Hard. Luckily, Death Is a Slap on the Wrist: even if Raz loses all of his lives inside someone's mind, the items and events he has already unlocked won't have to be found again.

The game is especially notable for its level of detail. Every line of dialogue in Psychonauts is voiced, and every single character has elaborate voiced reactions to virtually every item, ability or situation that Raz can show them. (This is even true for characters who aren't actually around when certain items or abilities are available: hacking the game reveals that the game data has scripted reactions for these things regardless.) Additionally, the majority of characters have their own separate plot lines and interactions, many optional cut scenes, and long, hidden conversations that can be overheard by Raz.

Double Fine and Schafer had interest in making follow-ups to Psychonauts for a long time, and these started being realized over a decade after the original's release. Psychonauts 2 was announced at the 2015 Game Awards, and was released in 2021. Funding was partially provided by fan donations through Fig

, as well as Double Fine itself and Starbreeze Studios. In addition, a VR game called Psychonauts in the Rhombus of Ruin was released on February 21, 2017 for PSVR; a year later it was released for Steam and Oculus VR. The game ran into financial difficulties again, and Microsoft purchased the studio; Schafer stated that had Microsoft not purchase the studio, the game would have been reduced in scope.