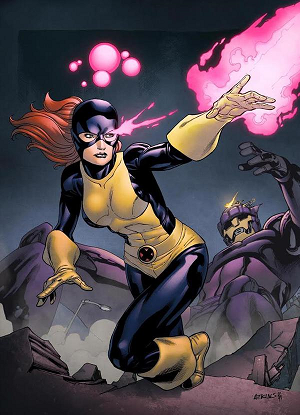 "Say something hideous and horrible jumped out at you. Something so disgusting that it simply must die. [tiffany lamp appears] 'Ack, oh. So tacky, I can't look directly at it.' But I control those feelings. Focus them. Concentrate, and... RELEASE. [destroys tiffany lamp with psi-blast] And the world is a better place."
— Sasha Nein, Psychonauts
Advertisement:

They say that the brain generates enough electricity to light a lightbulb. In the world of fiction, the more activity occurring in it, the more the brain is capable of. When the brain possesses Psychic Powers in one form or another, powers designed for raw offensive applications are probable. In this case, it is the power to channel and fire raw psychic energy in the form of a blast.

Psi Blasts are most commonly fired from the head, a Pstandard Psychic Pstance used as a means of focusing the raw psychic power and aiming it like cross-hairs. It might not even be visible, the battle of the minds happening exclusively in the psyche.