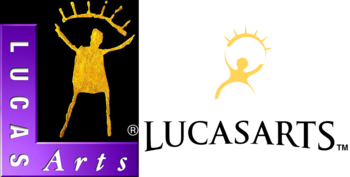 LucasArts Entertainment Company LLC is the game development firm of Lucasfilm (of George Lucas and Star Wars fame) that's in charge of doling out the license for all official Star Wars and Indiana Jones games. In addition to the aforementioned, the studio was also famous for producing adventure games like Full Throttle and Day of the Tentacle as well as the Monkey Island series (and more recently, the Mercenaries series), as well as a series of World War II and Star Wars-themed flight sims developed by Lawrence Holland's Totally Games! studio, mainly Battlehawks 1942, Secret Weapons of the Luftwaffe and the X-Wing and TIE Fighter space combat games.

Initially founded in 1982 as Lucasfilm Games, it was once a powerhouse creative studio, the 1990s mark the Golden Age of the company, a period when it produced many iconic Adventure Games and Space Simulation Games, often ranked among the best games ever. The firm gradually changed its focus towards outsourced Star Wars products after Grim Fandango returned very poor sale figures despite receiving many Game of the Year awards.

Subsequent titles published or developed in-house include Fracture, Mercenaries: Playground of Destruction (note that its sequel, Mercenaries 2: World in Flames had its publishing rights given to Electronic Arts by developer Pandemic) and Star Wars: The Force Unleashed. However, the sequel, The Force Unleashed II would prove to be the last in-house game developed by LucasArts; soon afterward, in the summer of 2008, the studio was disbanded, with LucasArts announcing that it would become largely a title publisher. Their financial state also led to the cancellation of numerous in-development titles, and indirectly caused Battlefront III developer Free Radical to go under due to withholding payments and cancellation fees. The last several years of the company were marred by poor sales, layoffs, and multiple changes of leadership. Internal development had all but ceased, though they still dedicated resources to keeping existing IPs aflost, such as Updated Rereleases of the first two Monkey Island games, the first digital releases of some of their out-of-print catalog titles, and a collaboration with Telltale Games to created an episodic sequel to the IP.

After a $4 billion buyout of its matrix Lucasfilm, the videogame branch and its intellectual properties were acquired by Disney in 2012. Though initially Disney announced the studio's operations and projects would remain undisturbed (such as Star Wars 1313 which was still in active development), they later announced the halting of all internal development in April 3, 2013 in favor of becoming a licensing entity; most of the staff was laid off, though the company is still open as a licensor.

Many LucasArts alumni became major players in the game industry after their tenures at the studio ended. Ron Gilbert and Tim Schafer both started their careers in games at the studio. Sierra was their main Adventure Game rival during both companies' heydey. Double Fine & Telltale Games, both founded by LucasArts alumni turned into Spiritual Successors of the types of games made in the 80s and early 90s. Fellow Disney subsidiary Pixar originated as LucasArts' "Graphics Group", before being spun off into a separate corporate entity.

Related to those above, but not made by LucasArtsnote In all cases, the IP is ultimately retained by Lucasfilm., are:

Prior to the formation of LucasArts, Lucasfilm created several titles for the Atari, Commodore 64 and other 8-bit home computers. These were developed under the Lucasfilm Games banner and published by various companies: