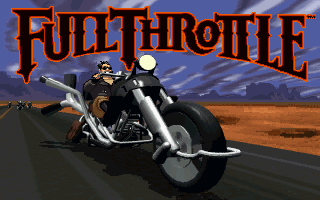 Hell yeah!
"Whenever I smell asphalt, I think of Maureen. That's the last sensation I had before I blacked out; that thick smell of asphalt. And the first thing I saw when I woke up was her face. She said she'd fix my bike. Free. No strings attached. I should've known then that things are never that simple. Yeah, when I think of Maureen, I think of two things: asphalt... and trouble."
— Ben, the opening narration
Advertisement:

Full Throttle is a SCUMM based LucasArts Adventure Game released in 1995, set in a futuristic world somewhat reminiscent of Mad Max and focusing on Ben Throttle, leader of the motorcycle gang "The Polecats." After unexpectedly making friends with Corley Motors CEO Malcolm Corley while resting at The Kickstand (a biker bar), he's taken out back by Corley's vice-president and confidant, Adrian Ripburger. Ripburger offers him and the Polecats a job to escort the limo to the annual shareholders meeting, but Ben declines out of pride. Ripburger has Ben knocked out by his private thugs and chucks him in a dumpster, tricking the Polecats into following along with the escort. Ben attempts pursuit to make up for lost time, expecting an ambush for his gang, but finds his bike sabotaged and brutally wrecked on the highway. When he wakes up, he finds he's in a small mechanic's shop belonging to toaster repairwoman Maureen. She offers to fix his bike for free, as a favor, and also for the pleasure of working on a bike for the first time in a long while. But Ben quickly learns that things are not so simple, as his pursuit of Ripburger and his friendship with Maureen lead him into a greater conspiracy than he realized.

The first game to be directed by Tim Schafer, Full Throttle features more of Schafer's sharp wit and love of heavy metal. It also had full voice acting and at-the-time revolutionary 3D rendering for the biker sequences. In addition, it was the only Lucas Arts game to make extensive use of licensed music, in this case by "authentic biker" metal band The Gone Jackals. While mostly an adventure game, it also splices in action-based bike fights during the driving sequences. The game is also notoriously short, even by adventure game standards, able to be completed in 4 hours even if you don't hurry. The game still has a cult following to this day.

Like Grim Fandango and Day of the Tentacle, it got a remastered version, courtesy of Double Fine Productions, which was released in April 2017.

For the Pinball game from Heighway Pinball, click here.