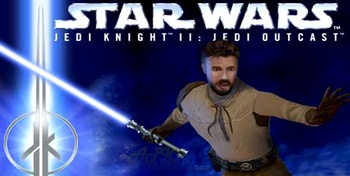 It is a time of relative
peace in the galaxy. Eight
years have passed since
the Empire's defeat at the
Battle of Endor, but
the New Republic still
struggles to restore order
and vanquish its enemies.

After defending the Valley
of the Jedi from the evil
Jerec and nearly falling
to the dark side himself,
former Jedi Knight Kyle
Katarn has severed his
connection with the Force
and returned to his
mercenary ways. With his
longtime partner, Jan Ors,
Kyle continues to aid
the Republic in the fight
against the Imperial
Remnant.

As the Remnant launches
its latest gambit to regain
control of the galaxy, Kyle
and Jan have been sent
by the New Republic
to investigate the planet
Kejim, home to a long-
dead Imperial outpost...
Advertisement:

Star Wars: Jedi Knight II – Jedi Outcast is a 2002 continuation of the Dark Forces Saga, though notice the lack of "Dark Forces" in the title.

Following the events of Jedi Knight: Dark Forces II and especially its expansion Mysteries of the Sith, Kyle Katarn has decided to hang up his lightsaber and sworn off his connection to the Force, instead returning to his old job of bounty-hunting as a New Republic mercenary agent alongside Jan Ors.

While on a routine mission to investigate a supposedly-abandoned Imperial outpost, Kyle and Jan stumble onto a conspiracy involving the Imperial scientist Galak Fyyar, an ambitious Chistori named Desann, a former student of Luke Skywalker's Jedi Academy that has fallen to the Dark Side, and mysterious crystals that can artificially imbue the holder with a degree of control of the Force. Kyle soon comes to realize that he may once again have to walk the path of the Jedi if he wishes to stand a chance of getting to the bottom of all of it.

Originally released for PC in March 2002, ports to macOS X, the Nintendo GameCube, and the Xbox followed in November. Much later, in September 2019, it was ported to the Nintendo Switch and PlayStation 4. Followed in 2003 by Jedi Knight: Jedi Academy, which also has a popular Game Mod which ports