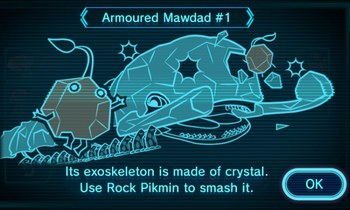 Should change its name to "Glass Jawdad"
Advertisement:

Sometimes, a boss has impervious armor you have to destroy before you can deal damage to them. This concept can take a number of forms. At its most basic, it acts simply as an addition to the boss' health pool — attack until their armor is depleted, then continue until their health is gone as well. Most of the time, however, attacks will have no impact whatsoever until the armor is removed, which may be done in a number of ways. Sometimes you need certain items or weapons to defeat them with; bombs or other explosives are a common choice. Occasionally, the "armor" is Some Kind of Force Field instead of physical plating, requiring the disabling of whatever is keeping it running before the boss can be attacked. In some cases, the armor will reform after a set period of time and need to be cleared off again.

This may serve as a variation to Shielded Core Boss without the Mooks or non-traditional armor guarding the boss.

Compare and contrast the Invincibility Power-Up, where you usually have to wait for your enemy's invulnerability to wear off on its own, and Armored But Frail, where an enemy has poor stamina but makes it up for it with high defenses. This can often overlap with Seemingly Hopeless Boss Fight, especially before the specific mechanism needed to chip off the armor becomes clear. See also Heavily Armored Mook, for a similar concept applied to weaker enemies.

If the problem is not the boss' armor, but instead some kind of Healing Factor that must be overcome, see Anti-Regeneration.