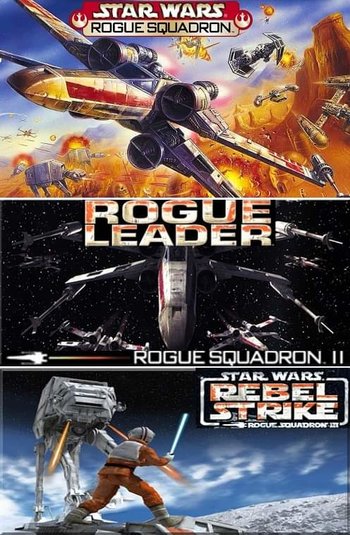 Rogue Squadron is a series of Star Wars Legends aerial and space combat games based on parts of the X-Wing Rogue Squadron series.

In 1996, at about the same time that the first novel of the X-Wing series was coming out, LucasArts decided to make a space combat game, similar to the Hoth level in Shadows of the Empire. Factor 5, the company they contracted, wanted to make games that let people play though action scenes from the films. At that time, Lucasfilm was not comfortable with video games drawing directly from the films. Then someone looked at the X-Wing Rogue Squadron comics and realized that they could use similar settings, putting characters from the films into new missions. A series of three shooter games called Rogue Squadron

The second game is widely recognized as the best—for instance, they got Denis Lawson, the original actor who played Wedge Antilles in the movies, to voice him—and the third is usually considered to be the weakest, largely due to incorporating ground missions that have iffy controls (though it also has the second game included in it, playable in a new co-op mode)—however, this may depend on how important multiplayer is to you (the third game is the only one with such a feature).

To tie in with The Phantom Menace, a cheat code was hidden in Rogue Squadron which allowed you to unlock a Naboo Starfighter for play. Factor 5 later released the Spin-Off Star Wars Episode I: Battle for Naboo on Nintendo 64, which is very much in the vein of the Rogue Squadron series (albeit with new ground-based vehicles as well as the flight combat), and was equally well-received and successful.

After releasing the three games, Factor 5 went on to make Lair. Reportedly they were sick of the series. Unfortunately, it didn't work out so well and Lair was critically and commercially panned, eventually leading to the closure of the studio.

A Rogue Squadron film set in the Star Wars canon was announced, to be helmed by Patty Jenkins, who confirmed that its writing will be influenced by the games and books in which the squadron appears. It has since been shelved indefinitely.