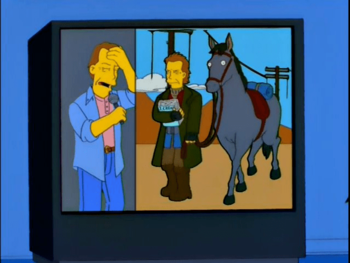 I'm sorry, I am really sorry, I don't know what I was thinking, but Field of Dreams was good, wasn't it? Made us all believe again?
"Hello, ladies and gentlemen, I'm Ronald Haver, and I'm here to do something which we feel is rather unique ... the ability to switch back and forth between the sound track and this lecture track."
— Film historian Ronald Haver on the first ever audio commentary for the 1984 The Criterion Collection laserdisc release of the original King Kong
Advertisement:

The DVD (and Blu-ray, by extension) Bonus Content with the highest ratio of "disappointment when it isn't included" to "likelihood you'll actually sit down and watch the whole thing." If you've bought a DVD, it's assumed that you like the movie or TV show or whatever. Fair enough. It seems logical that a good chunk of the viewing audience would want to know more information about the film they're watching, and also to have a compelling reason to rewatch a film you've seen in the theatre. The creators or other experts get together to record an audio (and rarely, video) track to be played during the movie. This track comments on the production process.

Though its inclusion is increasingly common, there are several famous directors who refuse to allow commentaries to be recorded for their DVDs. The most famous examples are Steven Spielberg, David Lynch, and Woody Allen. Spielberg says he doesn't want to distract the viewer from watching the movie and anything he has to say about the film can be found on the DVD features. Lynch is insistent on the Death of the Author issue and doesn't want to give his own, 'definitive', interpretation of the Mind Screw works he's famous for (it's for the same reason that he's a master of the Shrug of God). Allen has stated that he hasn't seen any of his films since they were released (and most of the DVDs don't even feature stereo sound) and has also given the explanation that he thinks movies should stand on their own merits.

Keep in mind that filmmakers are, first and foremost, artists, and are sometimes much better at expressing themselves via visual media rather than verbally (Tim Burton is particularly notorious for this, as he admits that he has poor communication skills).

At their best, DVD commentaries can be a wealth of informative, entertaining insights into the creation of the film, especially if the speakers are adept at the process. They may also have the canon answer to things that need some explanation. At the midpoint of quality, everything in the commentary is interesting, but was already discussed in other (shorter), special features on the DVD — making listening to it feel sort of pointless. At their worst, it can quickly devolve into an awkward self-congratulatory session.

Sometimes, the commentary is nonexistent for long stretches, sending you grasping for the remote to see if you inadvertently turned the track off. A rule of thumb is that commentaries which feature more than one person commenting together (in the same studio, not spliced together) will be more entertaining (though not necessarily more informative) than a solo track. Some filmmakers have started including subtitles for the commentary.

Still, it's always nice to know the commentary is there. And if it's not there or if it's poorly done, there's no reason why fans and/or haters can't decide to go into the commentary business for themselves...

If the actors are staying in character, then you have a case of In-Character Commentaries.

open/close all folders
The Abridged Series
Anime And Manga
Fan Works
Literature
Live-Action TV
Music
Music Video
Video Games
Webcomics
Web Original
Hi, everyone. We're the tropers and this is the first ever commentary for a wiki page....