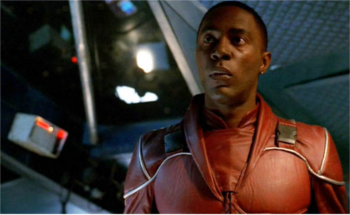 "Does that seem right to you?"
Advertisement:

The episode opens with River wandering in a daze through the ship after awakening. She passes the members of the crew, but perceives what appear to be their inner thoughts and glimpses of their past (such as Simon wishing he was back home, Jayne saying that the money to betray the Tams was "too good", and Book gleefully threatening someone) and stumbles into the cargo bay. She appears to see the cargo bay full of leaves and picks up a stick, but tells herself, "It's just an object. It doesn't mean what you think." She suddenly returns to lucidity and finds the terrified crew surrounding her, as she holds one of Jayne's pistols that he left lying around. Mal takes the gun from her, and River panics and flees.

After this the crew holds a council. Kaylee reveals that River had handled a gun at the assault on Niska's stronghold with disturbing effectiveness. Mal speculates that she may have psychic powers, because of her knowledge of things that she could never know, and they wonder how much of a threat she is (unknowingly with River eavesdropping). The group is unable to come to any consensus on what to do with River and they break to go to sleep. Simon and Kaylee talk about how much River loves the ship and are about to kiss, only for Book to interrupt them.

As the crew settles in for the night, the bounty hunter Jubal Early, who had apparently been following them, slips aboard. He knocks out Mal and Book with ease, locks all of the bunks, and sneaks up on Kaylee in the engine room. With disturbing calmness, he ties her up and threatens to rape and kill her if she ruins his plans to capture River. He then locates Simon and forces him to help him capture River, on the threat of raping Kaylee if he refuses.

During the search, Simon and Jubal verbally spar with each other. It becomes immediately apparent that Jubal is insane, with odd quirks and philosophies that Simon effortlessly responds to. They search Inara's shuttle, but no trace of River comes up and Jubal very calmly hits her for suggesting that he'll walk away from the bounty.

Jubal and Simon reach the bridge and Jubal prepares to shoot Simon if they can't find River. She suddenly begins speaking over the intercom, telling Jubal that she's "melted into the ship" and is now Serenity herself. She taunts him with knowledge of his past and intentions, revealing Jubal to be a psychopath who took up bounty hunting to give him a way to act out his violent and abusive impulses. In between forcing the bounty hunter into a breakdown, she contacts the other members of the crew to set her plan for a breakout in motion—Kaylee cuts herself loose and releases the locks on the crew quarters, allowing Mal to sneak off somewhere. (Zoe and Wash are told to stay put, while Jayne sleeps through the whole thing.) Jubal suddenly realizes that River took a spacesuit and snuck aboard his ship, which is how he's communicating with them. Finally, River states that she plans on leaving with Jubal (sensing great similarity between them as mentally disturbed outcasts) and saving the Serenity crew the trouble of dealing with her. Simon attempts to stop Jubal, only to take a bullet to the leg.

Jubal fights his way back through the ship and outside, and he stands on the outer hull of Serenity. Before he can float over to his own ship, however, Mal appears behind him and kicks him off into deep space. River exits Jubal's spaceship (sending it off on autopilot) and asks Mal for permission to come aboard, revealing that her supposed attempt to abandon the crew with the bounty hunter was all part of her plan to stop him, and Simon took a bullet for nothing. Back aboard the ship, Simon guides Zoe in patching him up before he passes out. Kaylee and River play jacks on the floor of the cargo bay, showing that their friendship has been rekindled.

The episode ends with a shot of Jubal Early floating through space, air running out. He simply says "Well... here I am."