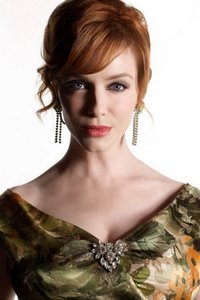 "We all know Marilyn just wants to be a Joan..."
Advertisement:

Christina Rene Hendricks (born May 3, 1975) is an American actor known to geeks and tropers mostly for her two appearances on Firefly as Saffron. Since then, however, she's got considerably more mainstream exposure for her role in Mad Men as Sexy Secretary Joan Holloway. She also appeared in Company opposite Neil Patrick Harris, Stephen Colbert, and Patti Lupone, and in Drive (2011), directed by Nicholas Winding Refn, with Ryan Gosling. By 2018, she's the protagonist of Good Girls, playing a soccer mom turned criminal when her family goes broke.