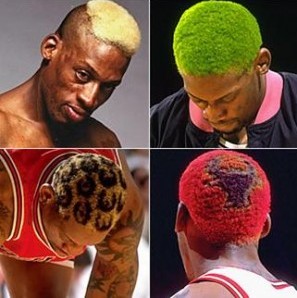 Dennis Rodman: 14th in most NBA titles, 22nd in rebounds, but first in hair colors.
Advertisement:

When a media personality has dyed hair so often, or for so long, it becomes an integral part of their whole characterization, to the point that it can be jarring to see them or their actor with their natural color.

Do not confuse with Dyeing for Your Art, which is when other physical characteristics are deliberately altered to fit the demands of the producers. Though it could overlap as some actors may prefer the new hair color such as Ashley Tisdale and Emma Stone who have long stayed with the color that they were required to change to. Nor does it have anything to do with the film series Die Hard.

open/close all folders
Actors, Actresses and Comedians
Athletes
Fashion
Advertisement:
Internet Celebrities
Musicians and Singers
Pro Wrestlers
It seems that very few professional wrestlers use their natural hair color in the ring, with most people dying their hair either blond or black. It's a bit of a joke that all the blondes in wrestling are bottled and all the real blondes dye their hair something else.
Other