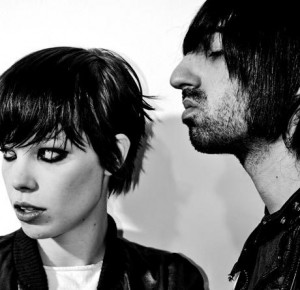 Alice Glass and Ethan Kath
we are crystal castles
we are 1 boy and 1 girl
we are named after She-Ra's home
we play rough
Advertisement:

Crystal Castles was a Canadian electronica band formed in 2006, known for their dark, melancholic aesthetic and a unique sound that started out as chiptune/electropunk-influenced synthpop before transitioning into futuristic and industrial territory that would become most synonymous with the genre of witch house.

Started by singer Alice Glass and songwriter/producer Ethan Kath, Crystal Castles began gaining traction off the success of their song "Alice Practice" both through MySpace and a sizable Colbert Bump following them performing the song in an episode of Skins.note While the details are spotty, the general origin story often shared alongside the song is that it was a soundcheck/proof of concept that was never meant to be released, in some versions recorded in secret by their engineer. However, Alice publicly denied this following her departure from the band, claiming that Ethan had deliberately fabricated the story to minimize her input. From there, they grew a reputation for their extremely chaotic live shows, the consistent divisive responses to their work, and the enduring passion of their fanbase. Their influences around this time included murder, blank looks on girls, and knives.

On October 8, 2014, Alice announced her departure from Crystal Castles, later embarking on a solo career the following year. The language exchanged between her and Ethan afterwards implied a less-than-amicable split. On April 16, 2015, Kath released a new song under the Crystal Castles name titled "Frail"

with vocals done by a new singer named Edith Frances, who would then become Alice's replacement. This pairing would release a new album, Amnesty (I), in August 2016; although they announced they were working on an Amnesty (II) nine months later, the band has not released any music since.

In October 2017, Alice published a statement claiming that she suffered sexual, emotional, physical and mental abuse from Ethan from when she first began recording with him at the age of 15. Ethan publicly denied the allegations and sued her for defamation, but the suit was dismissed in 2018. The band cancelled remaining tour dates that were planned at the time, and no further updates on the band have been provided.

Other public disputes the band found themselves in occurred in 2008, when they were accused of violating Creative Commons licenses by stealing artwork and samples from other artists, specifically a drum sample by Lo-Bat which featured on Insectica and the usage of a black-eyed Madonna

◊ as an album cover. These issues were seemingly resolved when they retitled Insectica to 'Crystal Castles vs Lo-Bat', and it soon became apparent that the artist who created the Madonna image was prolonging hostilities as he was benefiting from the exposure — Crystal Castles tried to pay him for the image but he refused to provide them with the necessary details.

They are unrelated to the Atari Arcade Game.