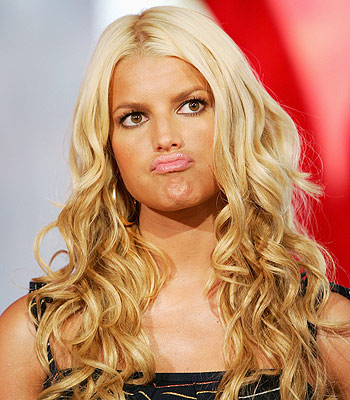 Is this a description or is it fish?

Jessica Ann Simpson (born July 10, 1980 in Abilene, Texas) is an American singer, actress, fashion designer, and television personality (1999-present). Simpson has achieved many recording milestones, starred in several TV shows, movies, and commercials, launched a line of hair and beauty products, and designed fragrances, shoes, and handbags for women. She has devoted time to philanthropic efforts including Operation Smile and a USO-hosted tour for troops stationed overseas. She started the Jessica Simpson Collection in 2005.

Much like Britney Spears and Christina Aguilera, Simpson was linked with The Mickey Mouse Club revival (though unlike them she failed the audition) and like them she went blonde and launched her career as a bubblegum pop star. While she enjoyed a reasonably successful career in the late '90s and early '00s, Simpson never reached the fame or sales of Spears or Aguilera.

What did make her a household name was not her music — at least not directly — but the 2003 reality series Newlyweds: Nick and Jessica which depicted her married life with then-husband Nick Lachey (member of Boy Band 98 Degrees.) The show displayed Simpson's unconventional view of the world ("Is this chicken I'm eating or is it fish?") and transformed her image from a lovable Britney clone to a lovable walking, talking Dumb Blonde Joke. A famous Dumb Blonde Joke.

After the end of Newlyweds (and her marriage to Lachey) in 2005, Simpson continued to alternate between her singing career and acting in films like The Dukes of Hazzard for several years. Since 2010, she has mostly focused her creative output on a mega successful clothing line, the Jessica Simpson collection, which is notable in that it is designed for women of all sizes, as opposed to runway models.

She is currently married to Eric Johnson. The couple have 2 daughters, Maxwell Drew (2012) and Birdie Mae (2019), and son, Ace Knute (2013). Her younger sister, Ashlee Simpson, is also an actress and pop singer.

This singer, actress, and television personality provides examples of: