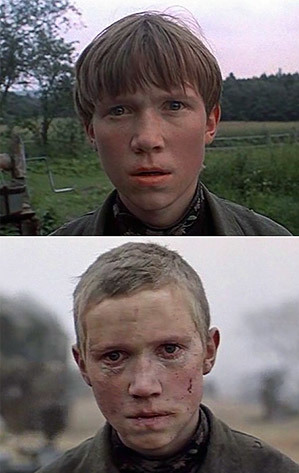 "In a year or so, when she's prematurely grey
And the blossom in her cheek has turned to chalk
She'll come home and lo, he'll have upped and run away
With a social-climbing heiress from New York."
— Professor Henry Higgins, My Fair Lady
Advertisement:

Grey or white hair in humans is usually a sign of advanced age (or of artificial bleaching)—but in fiction, even characters too young to have normal grey hair can sport it as a shorthand for past trauma. Often, a character's hair turns grey or white overnight (or even instantly in cartoonish media), as a result of a particularly traumatic event that changes their lives forever. The fact that already grown hair cannot turn grey without bleaching in Real Life usually gets ignored by the writers.

Disease Bleach is a specific subtrope where the life-changing event is a life-threatening illness, injury, or another kind of bodily harm. Locked into Strangeness can also be a subtrope if the strange lock is grey. Compare Young Face, Old Eyes and contrast Prematurely Bald.

To qualify for this trope, the character has to have some particular trauma in their life. Just being explicitly gray-haired without being old (such as Yu Narukami) doesn't count.