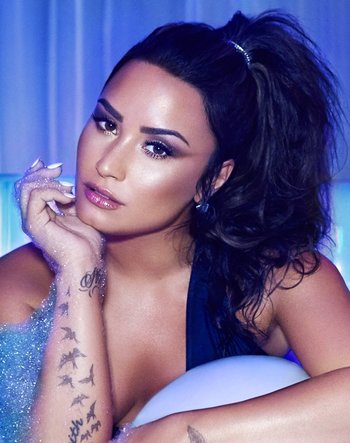 Associated acts:
Influences:
Go on and try to tear me down...
Advertisement:

After featuring in the main cast of Barney & Friends as a child, Lovato later gained prominence as a teen idol singer associated with Disney projects. Lovato starred in the 2008 Disney Channel Original Movie Camp Rock (and its 2010 sequel) opposite the Jonas Brothers, as well as kidcom Sonny with a Chance in the title role.

Amid creative differences and personal issues, Lovato quit Sonny With a Chance and parted ways with Disney. Their third studio album, 2011's Unbroken, featured a new sound that diverged from their original pop rock leanings to more of an Contemporary R&B-inspired profile.

In 2012, Lovato joined the judging panel of the American X Factor for its second season, eventually being assigned mentorship of the Young Adults category. They returned to the show for its third (and final) season in 2013, this time mentoring the Girls category. While on the show, they helped form the group that would later become Fifth Harmony.

Following their stint on X Factor, Lovato released their fourth album, 2013's self-titled Demi. During this time, they also recurred on the fifth season of Glee as a love interest for Santana, and recorded the pop version of "Let It Go" from Disney's Frozen. They have since released an additional two more albums: 2015's Confident and 2017's Tell Me You Love Me.

Compare to their Japanese counterpart May'n. In May 2021, Lovato came out as non-binary and changed their pronouns to they/them though they later updated social media to add she/her as acceptable as well in April 2022. Two months before, they had also come out as pansexual.

I'll come rising from the ground, like a skyscraper'