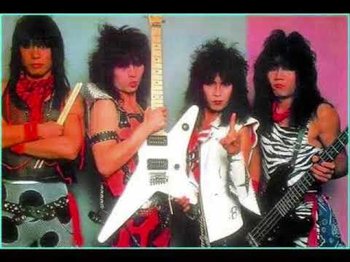 Classic line-up. From the "Thunder in the East" era.

"You've come to see the show! Well, we're gonna rock 'n' roll you! COME ON GET ON YOUR FEET! We're gonna make you feel alright! Hey, let's get so crazy tonight!"

Loudness is a Heavy Metal band, founded in 1981 in Osaka, Japan.

The original lineup consisted of Akira Takasaki (guitar), Minoru Niihara (vocals), Munetaka Higuchi (drums), and Masayoshi Yamashita (bass). Takasaki and Higuchi had formerly been members of the band Lazy (which also included singer Hironobu Kageyama), which disbanded earlier that year; Niihara had earlier been the bassist/singer in the band Earthshaker (although he left before they made any records). The band's early musical style was in line with the first generation and second generation (such as the NWOBHM scene) of heavy metal, especially Rainbow (Ritchie Blackmore having been one of Takasaki's main musical influences; notice that his previous band was named after a Deep Purple song).

The following year, the band recorded two songs and two instrumentals that were used in the anime movie Odin: Koshi Hansen Starlight, also released on the maxi-single Odin. Then they recorded their next full-length album (Thunder in the East) in Los Angeles; this was their first album to be released in the United States, was English-language only, and probably remains their most famous album. More touring in the United States followed, including as an opening act for Mötley Crüe. The band's musical style during this time gradually changed toward contemporary American hair metal.

After three more studio albums, Niihara left the band in 1988 and was replaced by Michael Vescera (formerly from the band Obsession). During Vescera's time in the band, they recorded two studio albums; the second one of these (On the Prowl, 1991) consisted of eight re-recorded versions of songs originally from albums / singles that were not released in the United States, with new lyrics in English and (for some of them) changed titles, as well as three new songs.

In 1992, both Vescera and Yamashita left the band, and were replaced by Masaki Yamada (formerly of Sapporo-based band Flatbacker, later known as EZO) on vocals and Taiji Sawada (formerly of X Japan) on bass. This lineup recorded their next studio album, Loudness, the same year. This album was an abrupt shift away from the hair metal stylings of the 1986-1991 albums to a much heavier (even compared to their original style) thrash metal-influenced style (much like Judas Priest's 1990 album Painkiller), as well as having elements of funk metal in two of the songs, as well as elements of Visual Kei in the appearances and styles of Sawada and Yamada and even, at the time, Higuchi. This album was also the first one since 1988 (or since 1984 if not counting EPs) to have Japanese-language lyrics and the first one since 1988 (or since 1982 if not counting EPs) to not be released outside Japan the same year as it was released in Japan (although in 2005 it did get re-released in the United States).

This lineup did not last long; in 1993, both Sawada and Higuchi left, leaving Takasaki as the only original member still in the band. Higuchi was replaced by Yamada's former bandmate Hirotsugu "Hiro" Honma, and guitarist Takasaki temporarily took on the role of bassist for the next studio album (Heavy Metal Hippies, 1994). Afterwards, new bassist Naoto Shibata (formerly from the band Anthem) joined, and this lineup recorded three studio albums throughout the late 1990s (which, unlike all their earlier albums, were released by a small record company, "Rooms Records", owned by Tak Matsumoto of the band B'z). The band's musical style throughout 1994-1999 remained very heavy, but slower than on the self-titled album, with influences from contemporary musical styles such as Groove Metal and Post-Grunge.

Meanwhile, in 1998 and 1999, original drummer Munetaka Higuchi led a group of various Japanese heavy metal / hard rock musicians for two albums (one studio, one live) of cover songs, dedicated to recently-deceased Rainbow drummer Cozy Powell; among this group were three of the four original members of Loudness (Yamashita being the only one not included). Then in 2000, the original lineup of Loudness officially reunited. Their next studio album (Spiritual Canoe, 2001) mostly returned to the musical style of the band's earliest era (albeit with more modern production values), with the notable exception of one rap metal song; it also marked a return to major labels (actually the same one that released their first album) and a return to entirely Japanese lyrics (except for the occasional pieces of Gratuitous English). This was followed by another studio album the same year, this time with a newer musical style. (Also in 2001, Takasaki recorded music for the anime series Geneshaft, which was also released on the album Geneshaft Original Soundtrack and the single Shaft Drive, both of which were released in the US by Geneon's ill-fated music division.)

The original lineup recorded seven more studio albums from 2002 through 2009 (a few of these have been released outside Japan). Munetaka Higuchi died of liver cancer in November 2008; one album (The Everlasting) with drums played by Higuchi was completed in 2009 by the other band members, and dedicated to Higuchi. Drummer Masayuki Suzuki joined in 2009, playing on one song on that album. The band has recorded one more studio album (King of Pain), has successfully toured the US and Southeast Asia, and is beginning work on a new album to be released in 2011 or 2012. Unfortunately, ex-bassist Taiji Sawada died in July 2011.