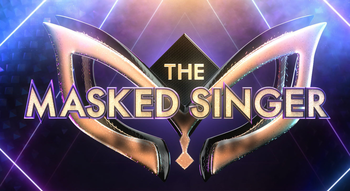 The Masked Singer is an American reality singing competition Talent Show that began airing on Fox in January 2019. It is based on the South Korean series King of Mask Singer.

Like many other series of its ilk, the premise involves a total of 12-18 singers going head to head with each other in each episode, with a panel of judges (Robin Thicke, Jenny McCarthy, Nicole Scherzinger, Ken Jeong, and an occasional rotating guest panelist) and the studio audience voting on which ones are best. The losers of each match-up then congregate at the end of each episode, with the one with the lowest votes being selected for unmasking — and elimination.

The twist here comes from the contestants all being known celebrities performing anonymously, wearing elaborate costumes and only being referred to as their persona: the identity of the contestant is only revealed after they are eliminated. Their non-singing voices are also synthesized to further obfuscate them. Viewers and the judges are given clues (primarily in the form of a short video introducing the contestant and alluding to their personal life, as well as physical clues brought on stage), and the judges are encouraged to share their speculation on who each contestant might be.

Its premiere was an unexpected hit, with Fox claiming it to be their biggest non-scripted premiere (without an NFL game as a lead-in) since The X Factor. As of now, the show currently has seven seasons under its belt, with an eighth one on the way.

After the smash success of the first season, the format of the U.S. version has been picked up by multiple international networks.

International versions of The Masked Singer