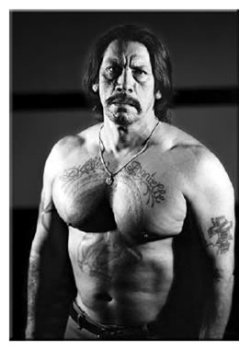 He's the kind of guy everyone can recognize, but not as many can name. He's been working in Hollywood since 1985 and has played dozens of supporting roles, usually as some kind of tough guy, henchman or thug. Trejo has also been in a number of Robert Rodriguez filmsnote The two later found out that they were actually second cousins, usually with slightly larger roles than he normally plays, including Desperado and the Spy Kids trilogy, finally culminating in his first leading role: the badass known as Machete. And, in a bit of Playing Against Type on King of the Hill, he voiced Enrique (the sad-sack bobtail driver from Strickland propane who wants to be Hank's friend).

He had criminal problems during his youth and spent time in jail, but the accounts of everybody he works with in the movies (everybody) is that he is one of the best people in the industry. The cameo heavy and varied cast of Machete stems from all the people he worked with in the past wanting to contribute something to his first starring role.

Danny Trejo has appeared in: