Film / Dora and the Lost City of Gold 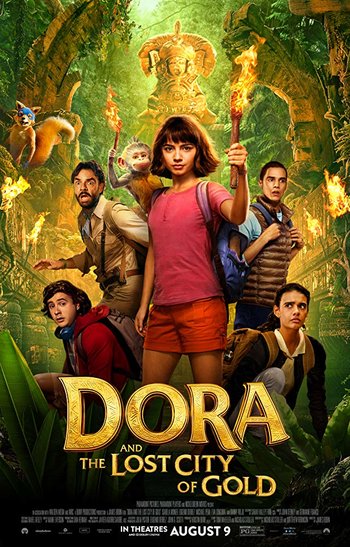 Explorer is her middle name.
Advertisement:

Dora and the Lost City of Gold is a 2019 adventure film, based on the Nickelodeon children's show Dora the Explorer.

Dora has spent years exploring the jungle with her parents, having great adventures. Now older, however, she must face her greatest adventure yet - high school. She is soon forced to return to her roots, however, along with a group of her classmates and her monkey friend Boots, to save her parents, and solve the mystery behind a lost Incan civilization.

The titular character is played by Isabela Moner, who's no stranger to the Dora franchise - she was one of the main voices on Dora and Friends: Into the City!, where she played Kate. Jeffrey Wahlberg stars as Dora's cousin Diego, with Michael Peña and Eva Longoria as Dora's father and mother (Cole and Elena), Danny Trejo as the voice of Boots, and Benicio del Toro as the voice of Swiper. Marc Weiner reprises his role from the show as Map, and series creators Chris Gifford and Valerie Walsh served as executive producers.

The film was theatrically released on August 9, 2019.

Dora and the Lost City of Gold

Hallucinogenic spores cause Dora, Diego and Alejandro to see everything animated like the original show.

Dora and the Lost City of Gold

Hallucinogenic spores cause Dora, Diego and Alejandro to see everything animated like the original show.