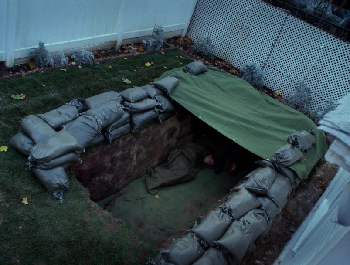 Sam Wilson: Your bed, it's too soft. When I was over there, I slept on the ground and used rocks for pillows, like a caveman. Now I'm home, lying in my bed, and it's like—
Steve Rogers: Lying on a marshmallow. I feel like I'm gonna sink right to the floor.
— Captain America: The Winter Soldier
Advertisement:

There are many things a man returning to civilization can look forward to, the warm food, their family being by their side again, air conditioning and centralized heating, not to mention the simple comfort in feeling safe. But there's always one thing that never sits right with them.

Their bed. It's too soft. No good for a man used to sleeping in a hard bunk or hole in the ground. It just doesn't feel right.

This trope is a common way of emphasizing a character's rugged, austere life, and how they don't fit in with the life of comfort and even luxury they find themselves in. Typically seen in outdoorsmen, soldiers, and poor/homeless characters.

Can result in An Odd Place to Sleep. Related to No Place for a Warrior and Stranger in a Familiar Land.