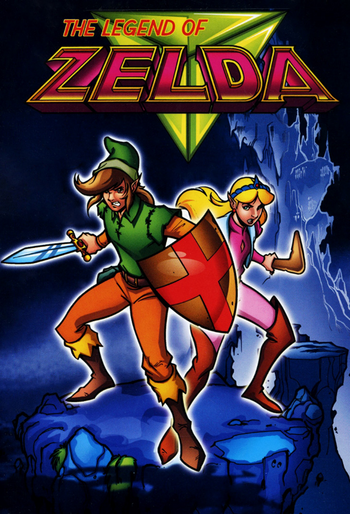 Zelda: This is the Triforce of Wisdom, Link. The evil wizard, Ganon, has the Triforce of Power. Whoever gets both Triforces will rule this land forever! You must help me, Link!
Link: Hey, for you, Zelda, anything!
— Opening sequence exposition
Advertisement:

In 1989, in addition to their animated episodes based on the Super Mario Bros. franchise, DiC had also produced a short series of cartoons based on the NES Zelda games. The cartoons include elements of both The Legend of Zelda and The Adventure of Link. Like the games, the animated series features Link's (voiced by Jonathan Potts) continuing adventures in the kingdom of Hyrule, battling the evil forces of Ganon (Len Carlson) alongside Princess Zelda (Cynthia Preston) and a Fairy Companion named Spryte (Paulina Gillis). It shared a number of details in common with the comic book series produced by Valiant Comics around the same time.

Thirteen cartoons were aired in total, airing as part of The Super Mario Bros. Super Show! during the Friday episodes (i.e., every fifth episode).note During the Monday-Thursday Super Show episodes, there is a preview of that week's Legend of Zelda episode during the second live-action segment. There presumably would have been more, but when SMBSS was cancelled, the Zelda segments went with it. The characters of Link and Zelda, along with their respective voice actors, were then adopted into the cast of Captain N: The Game Master, where Link had a rivalry-turned-friendship with the titular Captain.

Ganon yells at his minions, cackles evilly, and makes a mirror pun. You could say he outGLASSes other characters in hamminess.

Alternative Title(s): The Legend Of Zelda

Ganon yells at his minions, cackles evilly, and makes a mirror pun. You could say he outGLASSes other characters in hamminess.