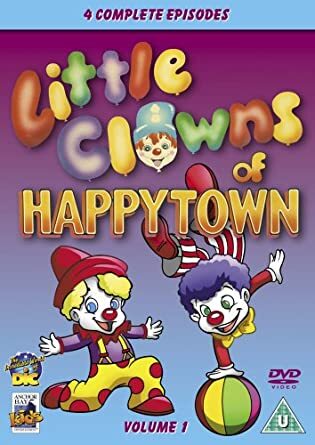 "Little clowns of Happytown
Spreading happiness around
A little laughter, joy, and fun
Is good for everyone!"
- The first lines of the show's Expository Theme Tune
Advertisement:

Little Clowns of Happytown is an American animated children's show that aired on ABC Saturday morning from September 12, 1987 to July 1988. It centers around a group of clowns from Happytown—Big Top, Badum-Bump, Hiccup, Tickles, Pranky, and Blooper, their pet elephant Rover and their mentor, Mr. Pickleherring—who go around spreading happiness and helping others with their problems while dealing with the Obviously Evil Awful B. Bad and his minions, Geek and Whiner, who constantly get in their way with their shenanigans.

The show ran for 18 episodes, and only six episodes were ever released on home media. The show was a co-production of Marvel Productions and Murakami-Wolf-Swenson, though only the former's logo showed at the end; ABC themselves also served as a co-producer, and the show was copyrighted to them (meaning Disney got their hands on it long before their acquisition of the Marvel Productions backlog in 2001 via Saban Entertainment).