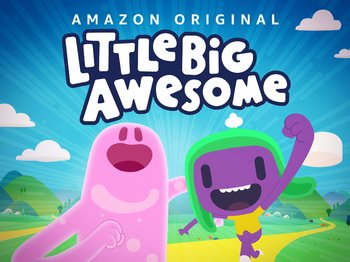 Little Big Awesome is a show on Amazon Prime, created by Tomi Dieguez and Ben Gruber. It follows two best friends as they have awesome adventures: Lennon, a little purple “solid” who always wears a green snow cap, and Gluko, a big pink “jelly” who can shift into different forms. Together, they can take on whatever problem the city of Townopolis throws at them! Notably, the show often utilizes multiple presentation styles in each episode, including traditional 2D, CGI, puppets, and even live-action in the case of Mr. Sun and The Moon (and various animals).

Not to be confused with LittleBigPlanet, even if some of the character designs do look weirdly similar, or Little Big League

Serving up some little big tropes: