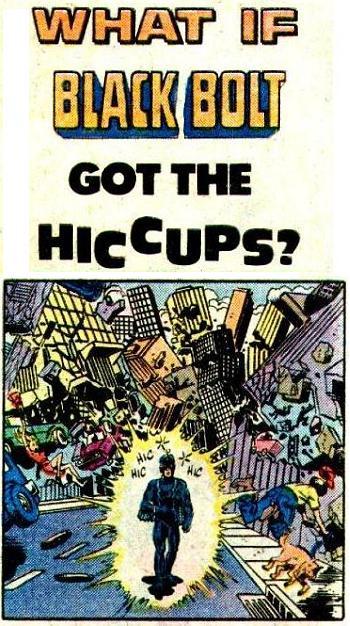 Black Bolt, you ask? That'd be a problem.
"I think most hiccup cures were really invented for the amusement of the patient's friends."
— Hobbes, Calvin and Hobbes
Advertisement:

The hiccups. Everyone gets them, and everyone has a hare-brained cure for them. So you can expect a television show to have an episode or segment where a character gets the hiccups. The other characters will all have their own cure, from the mundane (drink some water) to the mildly unpleasant (drinking pickle juice) to the outright bizarre (pinch your ear lobe and breathe normally). They'll try everything except the one consistently proven successful cure in Real Life of having an orgasm (like the censors will ever let that happen!) — although simply breathing shallowly in a slow, controlled fashion also often helps.note And, obviously, not an option if the hiccup-er is a kid.

After every remedy, the sufferer will pause dramatically, then emit a "hic". Invariably, someone will finally suggest scaring them out of the sufferer. The next half of the episode will consist of all the other characters finding ways to freak the bejesus out of the sufferer, all of which naturally fail to scare them even a tiny bit. At the end of the episode, the sufferer will usually be cured through one of two methods: either the hiccups simply go away on their own, or the sufferer becomes scared upon seeing something that wasn't intended to scare them (usually something totally benign). Cue "Everybody Laughs" Ending... but wait! Suddenly, another character starts to hiccup! Or something happens to make the cured sufferer start hiccuping again! Or the cured sufferer starts sneezing instead! Here We Go Again!

Used in a superhero plot, this is invariably followed by some sort of Power Incontinence, like a super-strong hero hiccupping themselves through a roof, or shapeshifter bouncing between forms every time one slips out. The reason for it is anyone's guess, but most likely Rule of Funny.

Alternatively, if the character is trying to be stealthy, hiccups can have the same effect as a Sneeze of Doom.

In real life, only mammals can actually hiccup as they have a diaphragm. Remember, a hiccup is a spasm of the diaphragm. As other animals like birds don’t have diaphragms, never mind that insects don’t even have lungs, this precludes them being able to hiccup in real life. So any bird or insect in fiction hiccuping is Rule of Funny or Most Writers Are Human. Panting in squamate reptiles (like lizards) can sound like a hiccup, but it’s not actually a hiccup.

Alcohol Hic can overlap with this trope.

Rocket comes down with a case of hiccups right before the Great Sky Race.

Rocket comes down with a case of hiccups right before the Great Sky Race.