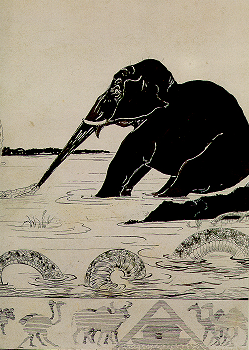 How the elephant got its trunk.
A series of origin stories for children by Rudyard Kipling, first published in 1902. Kipling's Just So Stories are tied with The Jungle Book as being his most famous work. It pretty much set the standard for children's literature in the 20th century.
Advertisement:

By the way, they're called "Just So" stories because you have to read them "just so", exactly as it is written, to put children to sleep. Because if you skip over anything, the child will wake up and complain that you missed a part (children do so love rote repetition). Mostly because the meter is so damn hypnotizing it'll relax anyone.

The fables featured in this collection include:

, or here, if you want the illustrations

Trope Namer for "Just So" Story.

...So, have you forgotten the suspenders?