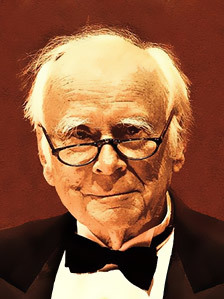 Bernhard-Viktor Christoph-Carl von Bülow (12 November 1923 – 22 August 2011), known as Vicco von Bülow or Loriot, was a German humorist, caricaturist, director and actor. His importance for the German Humour could be compared to Rowan Atkinson's or Monty Python's for the British.

Born in Brandenburg on the Havel in 1923 into a noble family originally from Mecklenburg which produced numerous officers (he himself was a lieutenant in a Panzer division during World War II), public servants and Bernhard von Bülow, one of Wilhelm II's chancellors. Already in his high-school days he began to work on stage. After 1945 he at first worked as a lumberjack before starting to study art. He first came to public attention as a cartoonist, and from 1967 he began to appear on television.

Though he has directed and starred in two movies (Ödipussy in 1988 and Pappa ante Portas in 1991), Loriot is better known for his little sketches - mainly parodying the German everyday life - and his potato-nosed cartoon characters, who seldom change their dull expressions.

And if we say "Germany", we mean The Bonn Republic, at least to begin with. He also became quite popular in the parts of the GDR where you could receive West German TV. After Reunification Pappa ante Portas was filmed in the Babelsberg studios in Potsdam and in Ahlbeck on the island of Usedom (on the German-Polish border).