Film / Hands Across the Table 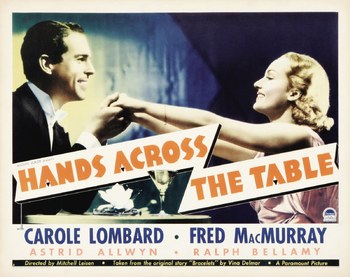 Hands Across the Table (1935) is a Paramount Screwball Comedy about Regi Allen (Carole Lombard), a gold-digging manicurist who thinks love is for suckers and doesn’t want anything to do with it.

Working at a barbershop, she comes across lonely millionaire, Allen Macklyn (Ralph Bellamy), a recluse former flyer who, after an aviation accident, now uses a wheelchair. He doesn’t want people to feel sorry for him, so he never goes out. Regi’s visits make him less grumpy and have a better outlook on life, and he laughs at her cynical nature towards love, knowing that she’s probably a closeted romantic.

Meanwhile, Regi literally bumps into Theodore Drew III (Fred MacMurray), a millionaire worth trying to nab. Luckily, she gets a date with him. Unfortunately, Regi finds out that he’s engaged to the pineapple heiress, Vivien Snowden (Astrid Allwyn), and the Crash affected the Drew’s cash flow. To add insult to injury, he’s so drunk after their date, she has to keep him in her apartment for the night. When Regi gets back from work, it turns out that Ted missed his boat to Bermuda, and asks Regi to let him stay so his soon-to-be father-in-law and fiancée don’t find out.

They both realize that they’re after the same thing: money. Love is something that can’t exist to them, so they become friends.

But being strictly friends proves to be difficult.

Directed by Mitchell Leisen, this is a stand-out screwball comedy that not only added to Lombard’s stardom, but made Fred MacMurray her frequent co-star: they appeared in four films together.

Hands Across the Table shows the following tropes: