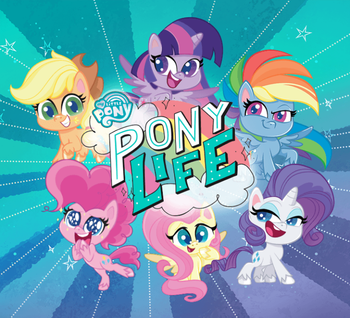 Produced by Allspark Animation and Boulder Media, the series focuses on the Slice of Life adventures of the Mane 6 as they wind down at the Sugarcube Corner, a local bakery hangout ran by Pinkie Pie. The bakery also houses a mysterious cache of magical potions that the group of friends break out when the need arises. The series was initially scheduled to premiere June 13, 2020 on Discovery Family, but it was postponed to November 7, 2020. The series premiered on Treehouse TV in Canada on June 21st.

Stop Motion shorts for the series started being released on the official My Little Pony YouTube channel on January 24, 2020.

, and the theme song here

It's a tropey life!

Baby, how you feeling?
(FEELIN' RUINED AS HELL!)

Example of:
Shut Up, Kirk!