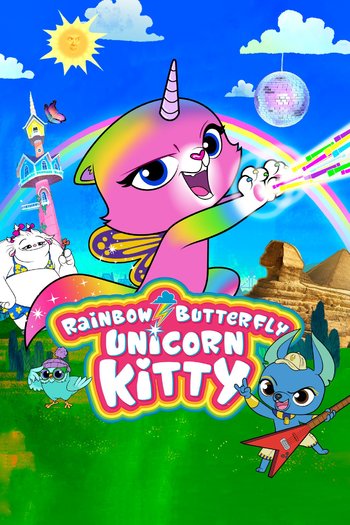 Yes, you read the title right. No, it's not a Lisa Frank fever dream.

Rainbow Butterfly Unicorn Kitty (officially shortened to RBUK) is a quite surreal American series created by Rich Magallanes that follows the everyday adventures of Felicity (Allegra Clark), a fearless, sassy rainbow-butterfly-unicorn-kitten hybrid with transformative powers that allow her to turn into the form of a rainbow, a butterfly, or a unicorn. Tagging along with her are her best friends; Miguel (Arturo Sandoval), a more down-to-earth active Anubis Chihuahua, Athena, a book-smart owl (Katie Leigh), and Yana the yeti (Laila Berzins). Together, the team have fun exploring the city of Mythlandia.

Essentially, it's Unikitty! but with more rainbows, butterflies, yetis, and owls.

The show and its toys are produced by Funrise, taking over for Saban Brands after it shut down, with animation by Bardel Entertainment (known for animating Rick and Morty and Teen Titans Go!). The first episode was released on the Nick App and On Demand on January 18, 2019. A sneak peek of the series aired on the main Nickelodeon network on January 27, before the show premiered a day later on Nicktoons in the United States. The show failed miserably, and as such it only lasted one season.