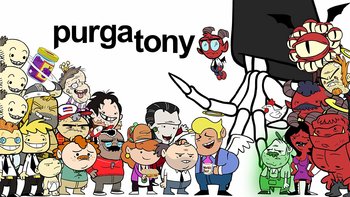 Purgatony is an animated comedy web series by Explosm Entertainment, the same crew that brought us Cyanide & Happiness, as well as Studio71.

It's about Tony Pergatelli, an Office Drone at Purgatory, which is portrayed as a corporate office in the afterlife that bureaucratically judges who goes to Heaven and Hell.

It currently has only one complete season, made of eight episodes, that were produced in 2017, before being shelved for budget reasons. But now that it's been released to the public on YouTube in 2019, hopefully it'll receive enough attention for a second season.