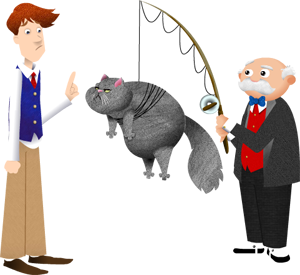 Bizarre Puzzle Game in which you use a cat on a fishing line to block attacking lawn gnomes? Check.
Where The Players Make The Games!
"Using 300 characters or less, describe an idea for a Puzzle Clubhouse game in which the player must re-contain escaped ghosts. Be as creative as you can!"
— Call for submissions prompt for an original game concept to be used in Puzzle Clubhouse Episode 3
Advertisement:

, launched through Kickstarter funding. The idea behind Puzzle Clubhouse is that making videos games can be a lot of fun, and many players are eager to contribute their ideas, skills, and passion to the game-making process. A new game episode would come out on the first of each month. Between episodes, the community creates, submits, and votes on game concepts, story ideas, artwork, and sound effects for upcoming episodes.

Like a comedy improv troupe working with audience suggestions, the development team would then produce each episode by weaving together a variety of community-generated ideas and content into a cohesive plot. The episodes follow the adventures of practical but puzzle-obsessed Everyman Jasper Jones and his unpredictable Uncle Cornelius as they explore Puzzle Clubhouse, a place where anything can happen.

Unfortunately, the series hasn't had any updates for several years now. The first four episodes can still be found and played on the Puzzle Clubhouse website.