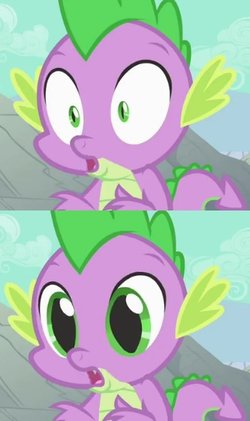 Normally, the eye filters light by widening or closing the hole in the center of the iris, called the pupil. Emotional reactions can achieve this as well: shock might narrow the pupil, while relaxing could widen it considerably. However, in animated fare or Comic Books, this can be very hard if not impossible to show, since a typical human pupil, at its widest, is 3-4 millimeters.note For the metric-impaired, that's 0.12-0.16 inches. This trope is a way to sidestep that difficulty. Instead of just changing the size of the pupil, you change the size of the iris (the colored ring surrounding the pupil) as well.

Your iris is no more capable of growing than your bones are of stretching like Gumby, but since they are by far the largest feature of an eye other than the whites, it's easy for artists to "expand" them to get the desired emotional reaction across.

Emotions this is meant to convey usually include love, (pleasant) surprise, desire, or awe. Animated characters experiencing the Mushroom Samba almost always get a close-up of their eyes showing this, just before reality goes sideways for them. Those effected by a Glamour, Love Potion, or Love Is in the Air effect may also get this, though those may be indicated with Mind-Control Eyes instead.

The opposite, when the irises are drawn in a shrunken state to indicate fear, pain, shock, or anger is Wide Eyes and Shrunken Irises. Compare Expressive Mask. Not to be confused with Iris Out.

When the pupils are drawn abnormally large, the eyes generally appear pleading or wistful. That trope is Puppy-Dog Eyes.

Opening the iris in Stargate SG-1 has nothing to do with this trope. See Dilating Door for doors like that.