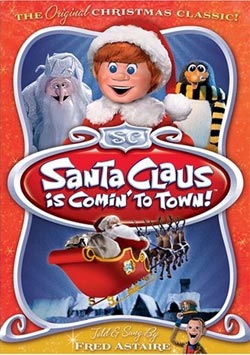 As narrated by polar postman S.D. ("Special Delivery") Kluger (Fred Astaire), a family of toy-making elves adopts a foundling baby and decides to call him Kris Kringle. When Kris grows into a young man (Mickey Rooney), he offers to take the toys the elves have made past the mountain of the evil Winter Warlock (Keenan Wynn) to the children of Sombertown. Unfortunately for Kris, the leader of the town, Burgermeister Meisterburger (Rankin-Bass favorite Paul Frees), injured himself shortly before by tripping over a toy left by a child and subsequently banned all toys from the town. The story details how Kris outwits the Burgermeister, but is eventually forced to run from his soldiers to the safety of the North Pole.

Followed by 1977's The Easter Bunny Is Comin' To Town, which had Fred Astaire back as S.D. Kluger telling kids about the Easter Bunny's origins, with a plot very reminiscent of the original. Mickey Rooney would reprise the role of Santa Claus in two later Rankin-Bass Christmas specials (The Year Without a Santa Claus and Rudolph and Frosty's Christmas in July), plus the former's belated sequel A Miser Brothers Christmas, the unrelated 2005 NBC special The Happy Elf, and in the 2008 live action short film Wreck the Halls.

Santa Claus Is Comin' to Town provides examples of:

Playing with their toys?!

"I see all the little children are playing with their toys... PLAYING WITH THEIR TOYS?!"

Alternative Title(s): The Easter Bunny Is Comin To Town

Playing with their toys?!

"I see all the little children are playing with their toys... PLAYING WITH THEIR TOYS?!"