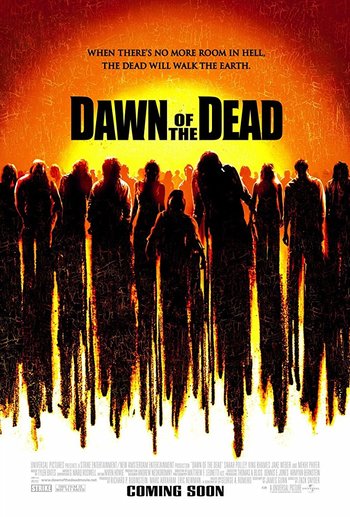 Get down with the sickness.
"When there is no more room in Hell, the dead will walk the earth."
— Televangelist
Advertisement:

A 2004 remake of the 1978 zombie classic starring Ving Rhames and Sarah Polley, directed by Zack Snyder in his feature debut, and written by James Gunn.

Ana, a Milwaukee nurse, finishes a long shift at her hospital where — along with other bits of Foreshadowing — she discusses a patient who was bitten in a bar fight. After work, she chats briefly with a cute neighbor child, then returns to her suburban home and her waiting husband. The next morning, she wakes up to find her zombified young neighbor in her house; the girl kills her husband, who then rises a zombie and comes after Ana. Ana escapes in her car, only to learn that, overnight, the town has fallen into chaos. A living human attempts to carjack her vehicle, causing her to panic, drive off the road, crash into a tree, and knock herself unconscious. When she awakens, she meets up with a police officer by the name of Kenneth, and then a small group of survivors more-or-less led by jack-of-all-trades Michael. They all break into a nearby shopping mall, where they are confronted by a trio of mall security guards, led by the surly C.J. Via binoculars and dry-erase boards, they also "meet" gun-store owner Andy, who is stranded alone in his shop across the mall's zombie-infested parking lot. The guards are eventually disarmed, and some more survivors are let into the mall. For a while, the group wallows in the mall's materialism, but the situation finally deteriorates to the point where the group decides to reinforce a pair of parking shuttles, drive to the local marina and escape out to an island on Lake Michigan.

Despite (or perhaps because of) some heavy differences from the original, many fans of George A. Romero find it to be a surprisingly good take on the material, and there are long-simmering debates among horror fans over which version is better.

Zack Snyder's later Netflix movie and franchise Army of the Dead is not related to this film, or any of the other Living Dead Series movies for that matter.

Let me get this straight

CJ summing up the insane escape plan of his group

Example of:
Let Me Get This Straight...

Let me get this straight

CJ summing up the insane escape plan of his group