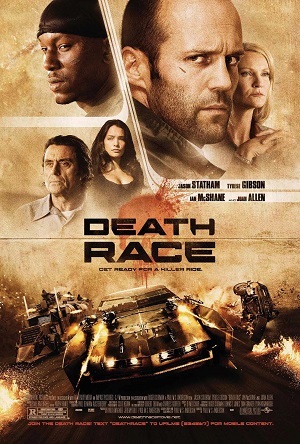 Jensen Ames (Jason Statham) finds himself in prison, forced to compete in the Death Race, a brutal three-day closed-course pay-per-view event. The race features armored cars with machine guns, flamethrowers, missiles, oil slicks, smokescreens and everything else a group of prison thug grease-monkeys can think to attach to a vehicle...

A much Darker and Edgier film than the original Death Race 2000, which was more of a grisly comedy. The 2008 version did away with everything in the original except the theme of a killer car race, the names of the two champions (Frankenstein and Machine Gun Joe) and the fact that Frankenstein was not the original, but another driver in the same mask. As a quick tribute, David Carradine, who was Frankenstein in the old film, voiced "Old Frank" in this one (for a couple of lines).

For the Rooster Teeth-created web series of the same name, see the page for its parent series DEATH BATTLE!

The films contains examples of: