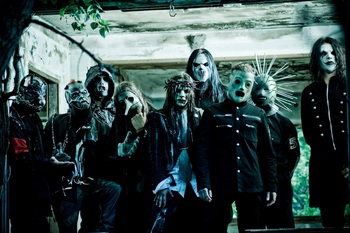 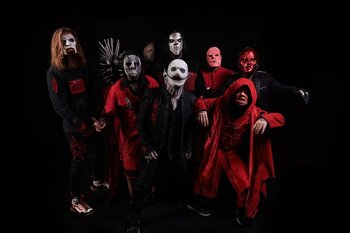 The band went through small lineup changes in its early years before settling on the 9-man roster that would stick for over a decade through their rise to mainstream fame. From this roster, six members are still in the band; the other three (Gray, Jordison and percussionist Chris Fehn) left in cases of dismissal or unexpected death. The band has since recruited a new bassist (Alessandro Venturella), drummer (Jay Weinberg) and percussionist (Michael Pfaff).

The band's sound began as a mix of heavy metal with shades of more extreme metal styles, alongside a down-tuned guitar setup, extensive percussion, and turntablism. The darkness of their songs was (and still is) complemented by the band's energy and lead vocalist Corey Taylor's catchy songwriting. Starting out, the band was routinely classified as "nu metal", a label which they preferred to distance themselves from and claimed was only assigned to them as their rise was simultaneous with that of the genre.

While the band had always incorporated melodies into their music, notably through Taylor singing instead of screaming (or even rapping on occasion), their early style gave way to more experimentation firmly based in melody, with all of their output from Vol. 3 onwards showing explicit influence from genres including alternative metal and rock.

Slipknot is also known for their distinct image, with members wearing individual masks and matching jumpsuits, as well as all members in their most famous roster going by a number from 0 to 8. These elements were designed as a way to emphasize the importance of the band's music as opposed to their identities, and as a response to the commercial practices of the music industry at the time. The members were presented as products, with masks instead of pretty faces, coveralls instead of trendy fashion, and numbers instead of names. Ironically, the masks have gone on to become one of the band's defining traits, with a large aspect of each album era being how the mask of each member changes in appearance, reflecting their change as a person.

Slipknot has become one of the most successful and popular modern bands in the metal genre (mainly in the nu metal subgenre, under which they're mostly labelled, although the band refers to themselves as being "Metal Metal"), and their concerts have given them a reputation matched by few other bands as an absolute must-see live.

Discography (with singles per album):

Other popular songs (sorted by album):

Corey Taylor of Slipknot and Stone Sour is well known for utilizing both clean vocals and harsh growls in many of his songs. "Unsainted" is one of many examples.

Corey Taylor of Slipknot and Stone Sour is well known for utilizing both clean vocals and harsh growls in many of his songs. "Unsainted" is one of many examples.