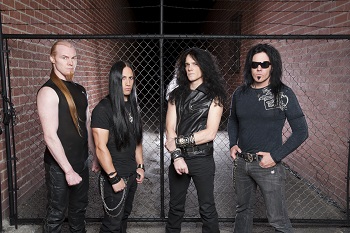 Morbid Angel is a Death Metal band hailing from Florida, and is one of the many bands that helped lay the foundations of the genre, alongside Death, Deicide, Cannibal Corpse, Obituary, and such. Despite forming in 1983, MA was plagued with lineup changes left and right, with guitarist Trey Azagthoth being the only original member left. That being said, he is not the only member many fans know, as both Pete Sandoval and David Vincent are both long-serving members.

In 1989, they finally debuted with Altars of Madness, released by Earache Records, which is hailed as a masterpiece among the death metal community and one of the genre's classics.

Their sound changed rather dramatically on their second album, Blessed Are the Sick (1991), the latter half of that album containing re-recorded demo songs.

Another album which gained 'classic' status was their third one, the bestselling Covenant (1993), on which their sound was once again different.

Domination was released in 1995 after the band signed on to Giant Records and thus they were the first Death Metal band ever to sign a deal with a major label. The album sparked some controversy among the fans regarding both its lyrical content and more sleek-sounding musical direction.

Frontman David Vincent left the band in 1996, after which the band recruited Steve Tucker to handle the bass and vocal duties. This incarnation recorded the Formulas Fatal to the Flesh album, released in 1998. Again, the sound differed markedly from its predecessor, taking the band in a more ruthless and brutal direction.

Morbid Angel seemed to have the tendency to alternate between brutal and more polished albums, their seventh studio album Heretic (2003) again being somewhat rawer. It was at that time the band started to get criticized because of what was perceived as being directionless. The album sold not very well compared to earlier ones as well.

The band did a lot of touring and although no new studio album was forthcoming, 2004 saw the return of David Vincent. In 2008 a new touring member was found in Thor Anders 'Destructhor' Myhren.

Illud Divinum Insanus, studio album number eight, was finally released in 2011. Apart from three solid trademark death metal tracks, the band went into a more industrial and electronic direction. The drummer was Tim Yeung, due to Pete Sandoval recovering from spinal surgery. To say the album was received poorly is an understatement although it most certainly has its adherents.

In 2013, David Vincent announced that Pete Sandoval was no longer a part of Morbid Angel, due to the latter's conversion to Christianity. As of 2015, Vincent himself has departed again, and Steve Tucker has officially rejoined the band. Yeung and Myhren have also left, citing financial issues (Yeung) and a desire to focus on Myrkskog mixed with the band's desire to work with someone closer in location (Myhren). After some ambiguity regarding whether Vincent was truly out, an official announcement stating that that was indeed the case was made on June 19, 2015. Around the beginning of 2017, the full new lineup was announced: Scott Fuller has taken the drum spot, while Dan Vadim Von (VadimVon) has taken the second guitar spot. The band released Kingdoms Disdained at the end of the year, which was met with much better reception.