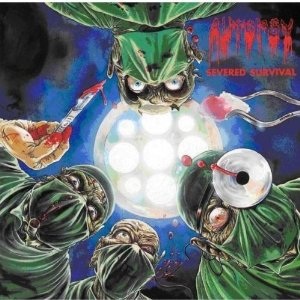 Believe it or not, this is the less violent version of the album cover.
Burning from the inside out
Bloody foam spews from your mouth
Smell the putrid stench of flesh
As it burns you to your death
- Charred Remains
Advertisement:

One of the pioneering bands in Death Metal, Autopsy was formed by Chris Reifert, the former drummer for Death. They're known for being co-Trope Codifiers for several facets of Death Metal alongside bands like Possessed and Death such as gruesome album art, Harsh Vocals, and lyrics relating to death and gore. They're also notorious for changing sounds once an album and founder Reifert's numerous side projects. They've been noted as an influence in many death metal bands, including Cannibal Corpse and Deicide. They broke up in 1995 for some of the members to start a new band called Abscess but reformed for live shows in 2009, and are back to recording as of 2011.