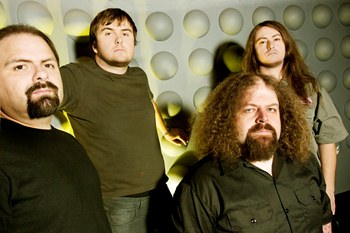 Napalm Death is a British band formed in 1981. They are generally considered to be the founders of the Grindcore genre, a fusion of crust punk and extreme metal.

Starting off as an anarcho-punk band, the band eventually developed a Signature Style that combined crust punk and post-punk with early extreme metal (eg. Celtic Frost, Possessed) and the spirit of no wave and power electronics. After releasing a couple of albums which are now regarded as landmarks in the grindcore genre, they began taking influence from Death Metal, playing a combination of grindcore and death metal (known as "deathgrind") to this day. Unlike many other death bands, their lyrics do not focus on gore; the majority of their songs are political in nature.

The band's lineup changed considerably in its early days, and as such there are no founding members remaining. Several of its members have been involved with other notable bands, such as Carcass, Godflesh, Jesu, and Cathedral.

Despite their place in music history, they're probably most well-known in the public eye for the song "You Suffer", which was included in the Guinness Book of World Records as the shortest recorded song (precisely 1.316 seconds long).