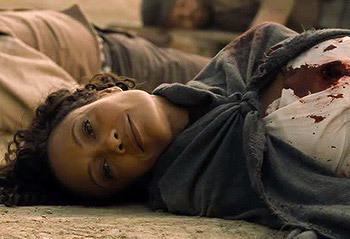 "Only the dead have seen the end of war."
— George Santayana (often misattributed to Plato)

A dead character has a peaceful expression. Sometimes noble and dignified as well.

May follow Go Out with a Smile, Obi-Wan Moment, and Big Sleep, but may also have died in visible misery and pain, with Dies Wide Open. May be part of This Was His True Form, and result from Dying as Yourself.

The mundane (or Maybe Magic, Maybe Mundane) equivalent of Died Happily Ever After... and it certainly can be Truth in Television. Not to be confused with Drop Dead Gorgeous, where the female body remains a sex object even when it's dead.

Real Life embalmers are paid good money to achieve this effect. The muscles in the face tend to constrict slightly during the embalming process, often resulting in the appearance of a faint smile on the corpse.