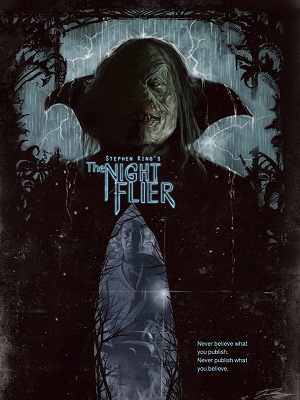 The Night Flier is a 1997 horror film based on Stephen King’s short story by the same name, which was published as part of the Nightmares & Dreamscapes collection. It starred Miguel Ferrer in the lead.

Richard Dees is the lead reporter for a low-fodder conspiracy and urban legend-newspaper called the Inside View. After years of investigating bloody crime scenes, Dees has become particularly burned out with his job. When reports of a mysterious killer start circulating, who travels between small airfields, slaughtering everyone present, Dees goes out in pursuit of the "Night Flier"—finding far more than he bargained for.

Not to be confused with Nightflyers, a 2018 Syfy miniseries based on a novella from George R. R. Martin. Or with Fly by Night Series, a children book series by Frances Hardinge.