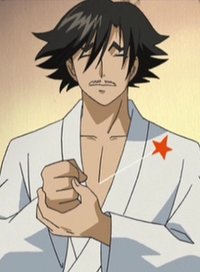 Sometimes when a character has an Idea Bulb moment, they may reflect it by holding one hand (usually the left) out and tapping the palm with the other fist.

Often the action is accompanied by a sound effect: a "bop" or a "bing". The Japanese onomatopoeia for the drum is oberobero. Anime producers often use the sound of a tsuzumi drum hit.