Film / The Pit and the Pendulum 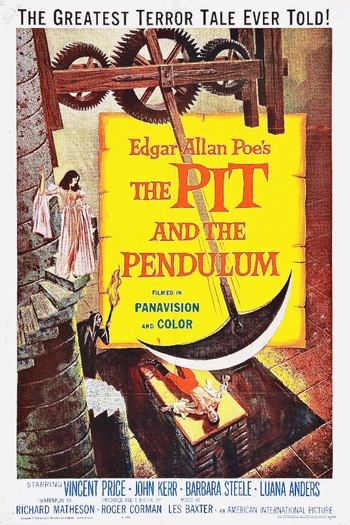 The Pit and the Pendulum is a American 1961 horror film directed by Roger Corman, starring Vincent Price, Barbara Steele, John Kerr, and Luana Anders. The screenplay was written by Richard Mathesonnote the guy who wrote I Am Legend and the Twilight Zone episode "Nightmare at 20000 Feet!" and is loosely based on Edgar Allan Poe's famous 1842 short story of the same name.

In sixteenth-century Spain, young Englishman Francis Barnard (Kerr) visits his brother-in-law’s Gothic castle in order to learn more about the death of his sister Elizabeth. This brother-in-law, Don Nicholas Medina (Price), is evasive about his wife's death, prompting the young man to investigate into the dark secrets hidden within the castle. As the protagonist attempts to delve into these secrets, he confronts the possibility of ghostly hauntings, premature burial, and betrayal. Eventually, he even comes face to face with threats of torture and madness within the titular pit.

The second of eight films in Corman's so-called "Poe cycle" (following House of Usher), noted by critics for the large impact it had on many Italian horror films that followed it. Stephen King has cited certain of its sequences as some of the most important in horror.