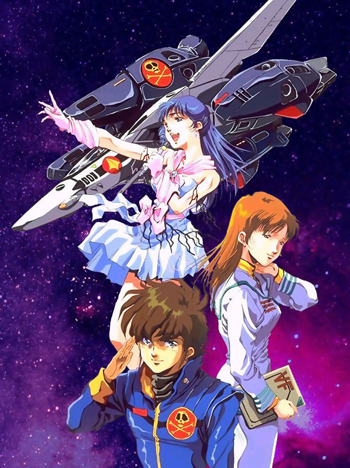 ''Do you remember love?''note Bottom to top: Hikaru, Misa, Minmay, and the VF-1S "Strike" Valkyrie.
Advertisement:

The first installment of the Macross franchise, the seminal series known as Super Dimension Fortress Macross originally started as a parody of Space Battleship Yamato & Humongous Mecha series (notably Mobile Suit Gundam). It later evolved into a "serious" series of its own. The name was originally to have been Super Dimension City Megaroad; one producer, a Shakespeare fan, wanted to name the fortress Macbeth. Macross was the compromise.

The story begins in 1999, when a city-sized alien spacecraft crash-lands on Earth. Ten years later, after the United Nations has successfully established a One World Order, said spacecraft, now named "Super Dimension Fortress One (SDF-1) Macross", has been rebuilt and is getting ready for its maiden voyage. However, a fleet of giant humanoid aliens called the Zentraedi crash the launch party, having identified the Macross as a battleship formerly used by their enemies. In response, the SDF-1 overrides its crew's commands and automatically fires its main cannon at the Zentraedi fleet, starting a war that will change the destinies of both species.

First aired in 1982, the show was originally scheduled to run for 48 episodes, but budget cuts due to a sponsor dropping out then forced a projected cut to 26. However, with a last-second infusion of money from Tatsunoko Production (which inadvertently spawned a never-ending legal headache for all involved) and the realization that the show had become a huge hit, ten more episodes were produced.

In 1984, a movie adaptation, Macross: Do You Remember Love?, was released. Despite making significant changes to both the plot and designs, the film is regarded at least as highly as the original show.

In North America, it was prevented from being released properly for a very long time because the series was dubbed in the 80s by Harmony Gold as the first season of Robotech. For some time, Harmony Gold continued to block efforts to bring anything Macross-related to North America and was happy to file lawsuits against anything that even looked like it such as BattleTech, directly contradicting decisions made in Japanese legal courts. However Streamline Pictures and AnimEigo were able to release subtitled editions of the series to VHS and DVD in North America, as well as Madman in Australia, and ADV Films produced an uncut English dub in the early 2000s. These releases are now out-of-print though. In 2014, Harmony Gold themselves (alongside partners A&E and Lionsgate) released Vol. 1 of a new DVD series featuring unedited Macross episodes (in Japanese and English) alongside the Robotech versions. However, this was a manufacture-on-demand release and Vol. 2 has yet to be solicited. In 2016, the series, in subbed form, was released on Amazon Prime Video.

In 2003, Sega and Bandai worked together to create a Playstation 2 game based on the show where players take on the role of an unknown UN Spacy pilot known as Skull Seven. He's assisted by two fellow pilots in either Skull or Apollo Squadrons if players want to play scenarios according to the original version or with the movie version.

In 2009, a manga adaptation of the original series was started, drawn and written by Haruhiko Mikimoto, that kept the original designs (though often favoring those used in the movie) while jettisoning some of the more Zeerust aspects (everyone finally has cellphones in that far-off year of 2009, for instance).

One trope that the show is particularly known for is the Love Triangle. In fact, it has been described by Shoji Kawamori, mechanical designer and co-creator of the series as a "love story set amongst the backdrop of great battles."