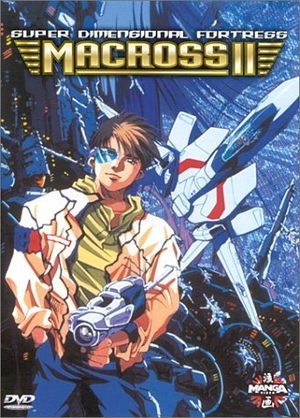 Super Dimensional Fortress Macross II: Lovers Again, a 1992 OVA, was the first animated sequel to Super Dimension Fortress Macross to feature an all-new storyline and cast of characters. It was also the only entry in the Macross franchise which didn't have any input from original creator Shoji Kawamori or the original production studio, Studio Nue. (It did contain work from Haruhiko Mikimoto, the original character designer, and was produced by Big West, which produced or co-produced everything else in the Macross franchise. With animation production by AIC, who did some animation and paint subcontracting on the original series, its movie, and some later entries) Either because it wasn't as well-received as expected, or because Kawamori and Studio Nue weren't involved (probably both), other entries in the Macross franchise have ignored the events of Macross II; Studio Nue has declared it a "Parallel World".

The story takes place in 2092, eighty years after the end of the original SDF Macross. Humans and Zentradi have made peace and rebuilt Earth's society. Earth's prosperity is interrupted only by the occasional rogue Zentradi fleet, which is easily defeated through a combination of Valkryie-type transformable fighter jets and idol singer music. When the solar system is invaded by the fleet of a new alien civilization, the Marduk, Earth's usual strategies are ineffective, since the Mardook have singers of their own — Emulators, whose songs are used to control the Mardook's enslaved Zentradi warriors.

During the first battle, Intrepid Reporter Hibiki Kanzaki rescues one of these Emulators, a beautiful woman named Ishtar. He takes her back to Earth, and introduces her to culture. Feff, one of the Mardook commanders, heads to Earth to try and retrieve Ishtar. Meanwhile, Ace Pilot Sylvie Gena and the rest of Earth's military try to fight off the invaders.

It's followed by a manga sequel known as Macross II: The Micron Conspiracy, where Hibiki and Sylvie investigate a terrorist attack against civilians of Zentradi herirage.