Anime / Mama Is a Fourth Grader 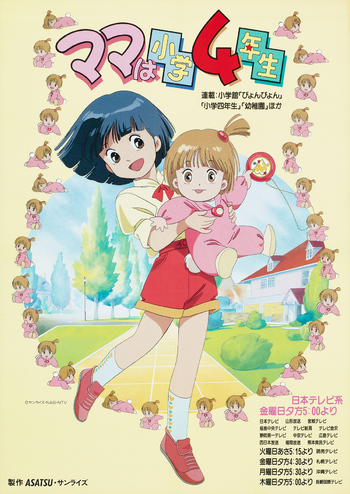 In the year 2007 a woman is preparing for a party, while her husband is tinkering with a communication device for their new baby girl, Mirai. A sudden lightning bolt affects the television, causing Mirai to levitate and vanish.

Back in 1992, a 4th grader named Natsumi Mizuki having a rough day; she is left behind as her parents move overseas (because her father's company only bought 2 tickets for their move to England so they have to buy her ticket at a later date), on top of them giving away her dog. Her aunt Izumi (her mother's younger sister), an aspiring manga writer, comes to live with Natsumi. They do not get along very well, with Natsumi calling her 'Oba-san' (Auntie) instead of 'Onee-san' (Big sis) as she would prefer.

While watching a movie on, Mirai appears in front of Natsumi. She becomes determined to raise the baby, not wanting to trust her with the clumsy policeman or her immature aunt.

Through the strange heart-shaped device, Natsumi and Izumi learn that the baby's mother is Natsumi Mizuki from the year 2007. She is a married 24-year-old, and pleads with her past self to take care of her daughter until they can determine how to return her. The device is also linked with a clasp around Mirai's neck that notifies Izumi when the baby needs her, through transmitting her emotional state. Natsumi and Izumi continue to quarrel over how to raise the baby, and worry about time paradoxes that could occur.

Natsumi must now try to raise her daughter, attend school, and foil her aunt's attempts to give Mirai away. Izumi is pressured into watching the baby while Natsumi is at school, in exchange for free board, since she lost her apartment. During this time, she tries to focus on creating her manga without distractions.