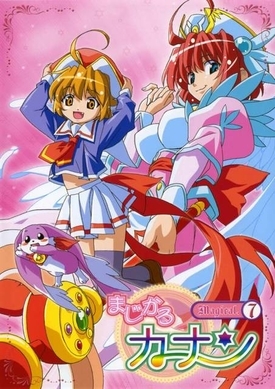 Magical Canan is a 2005 Magical Girl anime by studio AIC. It's based on an eroge Magical Kanan released in 1998 by Terios as a game and 2000 as a hentai OVA. The story tells of Chihaya Hiiragi, an ordinary student, who one day meets a cute creature that has more than its look. The creature is the magical life form with Human shape-shifting ability from the land of Evergreen named Natsuki, coming to earth on a mission to recover five stolen "seeds" that has a power to manipulate and drive human's desires. Chihaya, who's dragged into this task, is given a power to turn into a Magical Girl Warrior and starts her quest to recover all the cursed seeds. Unknowingly to the girl, this task is more involved around her than she thinks.