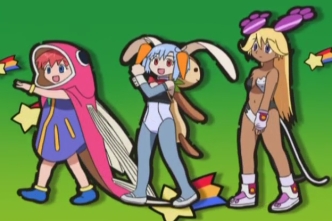 One day Padudu, a young girl from Sea Heaven, decides she wants to become a magical girl and heads out to Sweetland. There she must try to win contests and fight other magical girl candidates to collect "Flower Marks". Once she collects a total of twelve Flower Marks, she has the right to call herself a fully fledged magical girl, with all the fame and privileges that come with the title.

Padudu is accompanied by her companion Uokichi, a fish that she wears as a cloak. She can also use him as an emergency food supply, even though Uokichi is not too happy about that. Padudu bumps into Pipin and Myumyu, with whom she forms an at times uneasy alliance. There is also Nonononn, a former candidate, who appears to have a score to settle with Purulun, Sweetland's rather cruel queen. Add to this Ketchup and Mustard, the inept police officers of Sweetland, plus Zucchini, Queen Purulun's clueless minion, and you have yourself a rather strange bunch of characters indeed.

Magical Play started out as a series of 23 Web Animation episodes, released in 2001. It's an affectionate parody of the magical girl genre, especially the warrior variety. The character design is by Kiyohiko Azuma, who is better known for his works Azumanga Daioh and Yotsuba&!. An OVA has also been made, using 3D techniques and with a storyline that diverges quite a bit from the original series.

This anime is available on Hulu