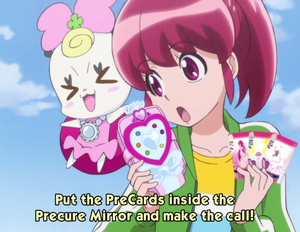 The Hero is, in the beginning, just a normal kid (or at least relatively normal, anyway). However, this character has a powerful destiny, completely unaware of the role they will play in the grand scheme of things. Someone has to break the news, and turn this Muggle into the hero they're meant to be. And that someone is... a talking cat?

Part Talking Animal and part enlightened teacher, the mentor mascot plays the dual role of teaching the protagonist about their destiny and powers, while at the same time adding that little bit of comic relief and cuteness. Even so, the Mentor Mascot takes its job seriously, and tends to accompany The Hero everywhere just in case the Mooks or the Quirky Miniboss Squad show up.

In a show (or other medium) where the Masquerade is of significant importance, the Mentor Mascot will simultaneously be the strictest enforcer and the greatest threat to said facade, since talking animals are usually not normal. This can usually be solved with pretending to be a stuffed animal, after all, Girls Love Stuffed Animals, but will still be used for comedic effect at times, especially if the mascot is mentoring a grown man.

Oftentimes, the mentor is an Old Master who was cursed into a helpless form, serving as a very good justification for why he is shepherding the Ragtag Bunch of Misfits instead of using his great knowledge and power to save the world himself.

Generally an anime and manga trope (especially common in Magical Girl anime) but still present in other media. In Magical Girl shows, this critter is usually the one who initially gives the girl her powers, and is known as a companion, familiar, or fairy.